This webpage features the most noteworthy drug abuse statistics and data surrounding drug addiction in the United States, including overdose deaths, addiction by drug type, and overall illicit drug use. Use the navigation links above to find area-specific information, or continue reading for the main highlights.

In 2018, 53 million or 19.4% of people aged 12 years and older used illegal drugs or misused prescription drugs in the previous year:

If alcohol and tobacco are included, the number of Americans who were current substance users in 2018 climbs to 60.2%, or 165 million people:

In 2019, 5231 e-cigarette/liquid nicotine/vaping device related cases were handled by poison control centers in the US. As of April 2020, there have already been 1203. 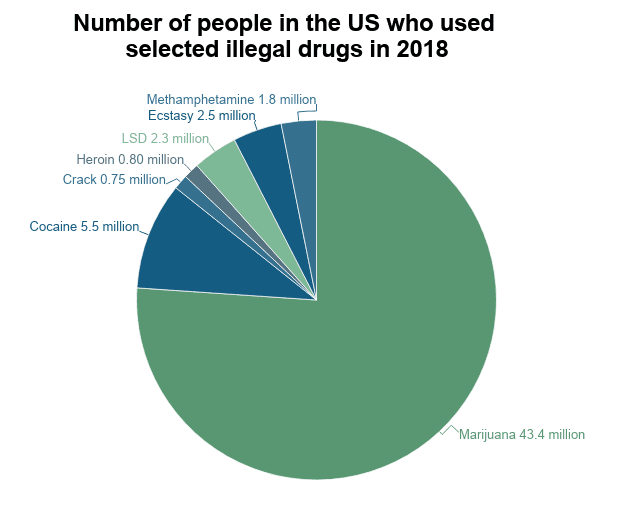 Drug abuse is a worldwide problem with some countries, including the US, disproportionately affected.

Drug-Related Deaths in the US

In 2018, accidental drug overdose was the leading cause of death among persons under the age of 45. Additionally:

Hallucinogens are both naturally occurring (plants and fungi) and synthetic. As most hallucinogens have no accepted medical use for treatment in the US, they are illegal.

In 2018, nearly 140 million Americans over the age of 12 were regular alcohol users (in the previous month):

In spite of its negative impact, more Americans than ever before consume alcohol on a regular basis, contributing to about 88,000 alcohol-related deaths per year.

It is a factor in the three leading causes of death among 15-24-year-olds: accidents, homicides and suicides. Beyond that, alcohol is also the agent in many catastrophic incidents. Kids who start drinking young are also seven times more likely to be in an alcohol-related motor vehicle accident when they begin to drive. In addition, 97,000 students between the ages of 18 – 24 are sexually assaulted in an alcohol-related incident. 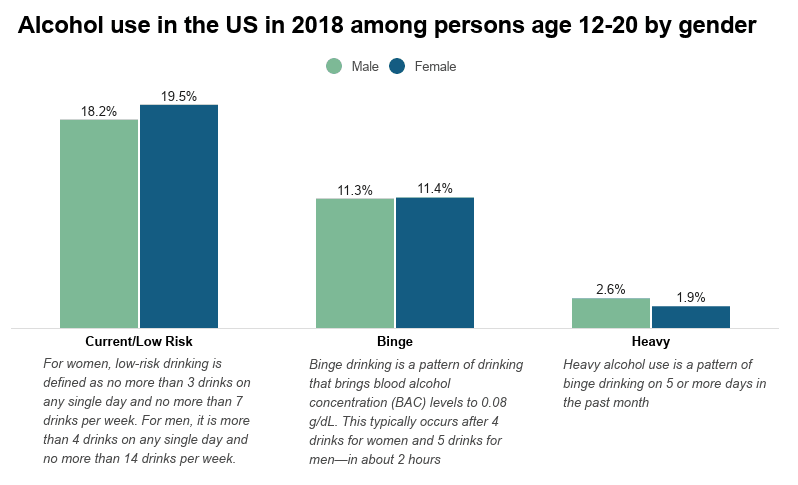 Alcohol negatively affects people from all walks of life. In 2014, the number of alcoholic liver disease deaths was 9,388 and the number of alcohol-induced deaths, excluding accidents and homicides, was 30,722. To add on, alcohol poisoning kills six people every day. Of those, 76% are adults ages 35-64.

Over 15 million individuals struggle with an alcohol use disorder in the United States, but less than 8% of those people receive treatment.

Non-sanctioned/non-medical/non-prescribed use of these controlled substances is considered drug abuse. They are likely to create physical or psychological dependence.

Common substance abuse and risk factors in the United States include: 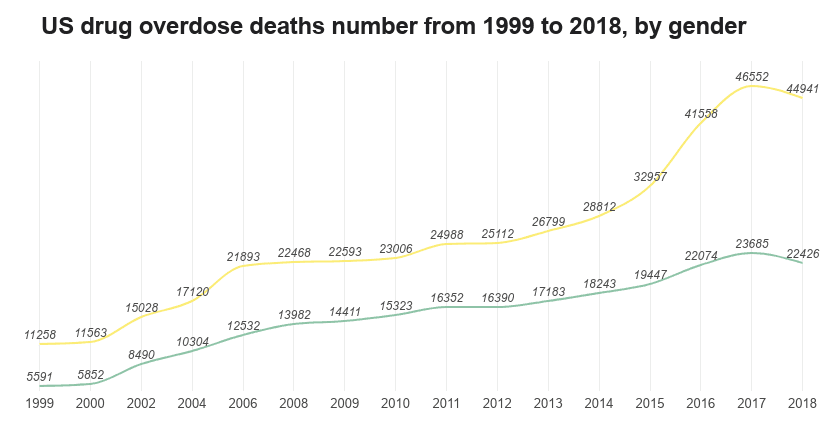 The Consequences of Drug Abuse:

In 2017, the cost of drug abuse in the US was nearly $272 billion, taking into account crime, healthcare needs, lost work productivity and other impacts on society:

High-risk behaviors and drug abuse also result in much higher chances of contracting viral infections such as hepatitis or HIV:

More recent advances in combating the opioid epidemic include: